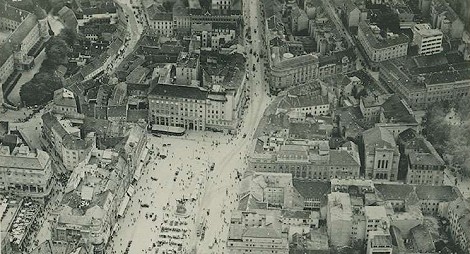 Due to a process of political emancipation and gaining of all citizen’s rights which began in the late 18th century and continued throughout the 19th century, Jews in Croatia through their industry and devotion became prosperous, respectable and started to grow in numbers.

At the begining of the 20th century, there were 21 Jewish communities in Croatia, largest being in Zagreb and Osijek (3000 in each of the cities), and with the total of more than 20 thousand across the country.

World War and the holocaust

Then, during the World War II, the Jewish community experienced sharp decrease in numbers caused by extermination policies of Nazi rulers and the holocaust.

Only about 5000 Croatian Jews survived the war, about half of which moved to newly established Israel state in Palestine. According to the 2001 census, only about 500 Jews live in Croatia today, but hundreds of Croatian citizens with Jewish roots are born in mixed marriages. Many of them do not officially state their Jewish nationality.

Those who are interested in genealogical research of their Jewish roots in Croatia can find records in Croatian State and regional archives.

Vital records (matične knjige) of the Jewish community from Cernik near Nova Gradiška are available for years 1861-1900.

Jewish community in Čakovec, Međimurje, preserved it’s records well, so birth, marriage and death records (matične knjige rođenih, vjenčanih i umrlih) are available for 1782-1895. Many of the records are in Hungarian language, since that part of today’s Croatia was under Hungarian dominion until the end of the First World War.

Karlovac also had a notable Jewish community, and the records that they left behind range from 1853 until 1880.

Orahovica is the Croatian town where one of the oldest Jewish vital records were kept, dated from 1779. The latest available genealogical records related to Jews living in Orahovica are from 1939.

Vital records of the Jewish congregation from Osijek (also known in Hungarian language as Eszek or in German Esseg) are available for years 1780-1913.

Members of the Jewish community in Pakrac is recorded in books of births, marriages and deaths for years 1866-1931.

And finally, for the Jews from the Croatian capital of Zagreb, Croatian State Archive keeps birth, marriage and death records for years 1852-1904.